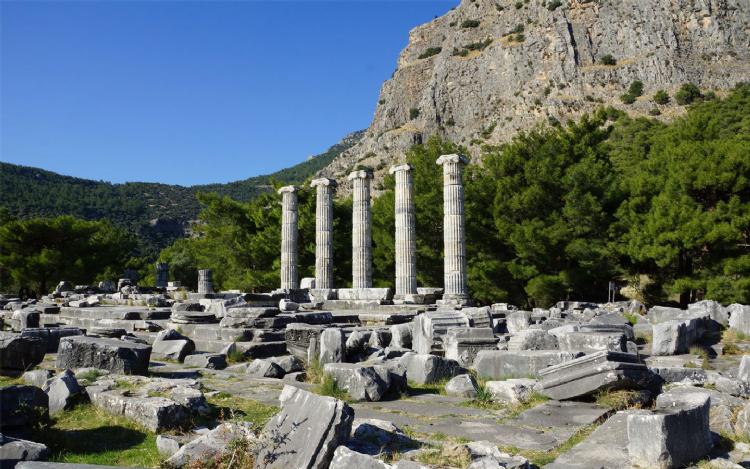 When you come from Güllübahçe asphalt, which leaves the 5th km of Söke-Bodrum road, you will see the tablea of ​​Priene, one of the most beautiful ruins in our country, and enter right. If you are coming from Milet-Didim direction, you will go via Atburgazı and turn left at 21.km. There is parking at the entrance. When you enter, you will find a neat sign showing the plan of the ancient city.

In every building you see, you will see a small sign stating its name. Books written in foreign languages ​​of Priene and other ancient sites are also sold at the entrance. The city was established on the foot of Samsun (Mykale) mountain. Now there are paddy fields on the wide and flat plain that can be seen when you look from the highlands where the city is located. This used to be the sea, and Priene had two harbours. The city whose ruins we see today is BC. It was built on the site of the old city in 350 BC. Only one coin was found from the old city. The city was built in the form of a grid and as four sets in accordance with the planning of Hippodamos, one of the most important architects of the ancient age. The city, which remained under the rule of Alexander first, then the Kingdom of Pergamon and Rome, and continued its importance as a Bishopric center in the Byzantine Era, was founded in XII. abandoned in the century The city lost its wealth and importance because the Menderes River filled the bay and ceased to be a port city. When you enter the city, there are three cisterns that meet the water needs in the north of the road. Turning to the right, the temple of the Egyptian gods is seen. The oldest known theater is 5000 people. The theater was also the meeting place of the people's assemblies. The first row of the theater in good condition, consisting of fifty rows, consists of special seats made for the protocol. The special seat in the middle of this row was reserved for the king. Next to the theater, there is the Byzantine Church, and the upper gymnasion and bath in the south of the church.

The Temenos of Demeter is at the foot of the Acropolis. The temple of Athena was established in the most dominant place of the city. He raised some of the columns together with the capitals. Only the foundations of the altar of the temple can be seen. Some of the reliefs of the altar can be seen in the Istanbul Archeology Museum.

The bouleuterion, where the assembly meetings are held, has a capacity of 640 people. The sacred fire was constantly burning in the building, the secrets of which have survived to the present day. At the bottom of the Temple of Athena, there is a fish and meat market on the side of the main street and houses on both sides. When descending from the southwestern corner of the Agora on the stairway to the south, a gymnasion close to the walls can be seen. The sitting places of the stadium adjacent to the east side of the gymnasion are on one side.