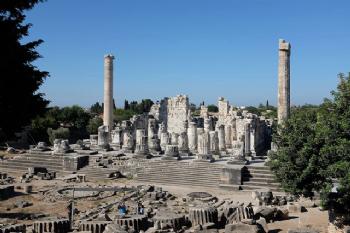 İlyas Bey Mosque is a mosque belonging to the Anatolian Principalities period, located in the village of Balat, next to the ruins of Miletus, in the Didim district of Aydın province. It is a part of İlyas Bey Kulliye. 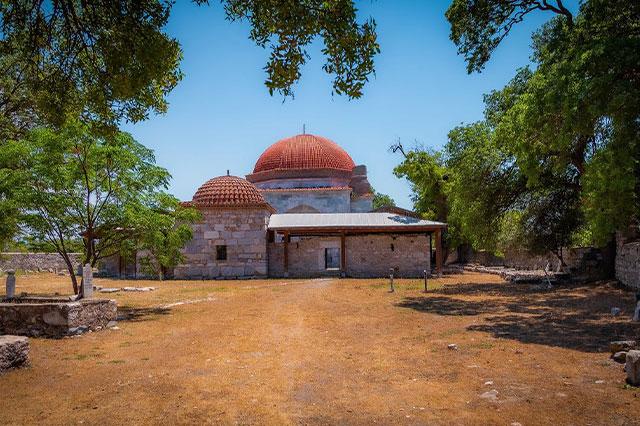 Its construction was started by the order of İlyas Bey, the last ruler of Menteşeoğulları, in May-June 1404. It is also known as 'Koca Mosque and Cuma Mosque'. It is a part of the İlyas Bey Kulliye, which consists of structures such as a mosque, madrasa, soup kitchen, double bath, and bazaar. Marble blocks, most of which were reworked and placed on the walls, were used in its construction. It is one of the leading works of Anatolian Turkish architecture with its original architecture, facade design and decorations.

The mosque was restored together with the other structures of the complex between 2007-2012. This restoration project received an award in the category of "repair and protection of historical monuments" from Europa Nostra, whose mission is to protect Europe's cultural heritage.

Balat, which was built on the ancient city of Miletus, joined the Menteşe Principality in the second half of the 13th century and the Ottoman Empire in 1391, but Timur, who was victorious against the Ottomans in the Ankara War, gave his lands back to the Menteşe Principality, like other Anatolian Beys. Menteşeoğlu Bey İlyas started the construction of İlyas Bey Mosque in May-June 1404, when he became the head of the principality again after twelve years.

The structure, which was damaged as a result of the severe earthquake that occurred in the Büyük Menderes basin in the 1890s, was repaired for the first time in 1905 as far as is known, and the dome of the building was covered with old-style corrugated tiles. The mosque has partially undergone minor repairs after the 1955 earthquake. It was restored as a result of the restoration project of architect Cengiz Kabaoğlu initiated by the industrial establishment Söktaş between 2007-2012.

İlyas Bey Mosque, which does not have a narthex, is located in the south of a courtyard with a fountain surrounded by madrasah units on three sides. 18.17 m. X 18.27 m. The square planned structure of the dimensions is covered with a dome, which is passed with squinches filled with muqarnas. The dome is 14 m. on an octagonal pulley. is in diameter; It was probably covered with tiles during the repair in 1905.

The building is entered from the north side. There is a pointed arched portal niche on this façade; There are three low-arched openings supported by two columns inside the niche. On the other three facades, there are two double windows with iron bars at the bottom and plaster grids at the top.

The magnificent marble mihrab opposite the entrance is framed by a stalactite border, and the intervening surface is decorated with inscriptions and geometric floral motifs. It is 7.37m high and 5.12m wide.

The walls of the building are covered with marble inside and outside. The minaret, which is located in the northwest corner and whose entrance is provided by a round arched door in the harim, was destroyed during the earthquake in 1955.