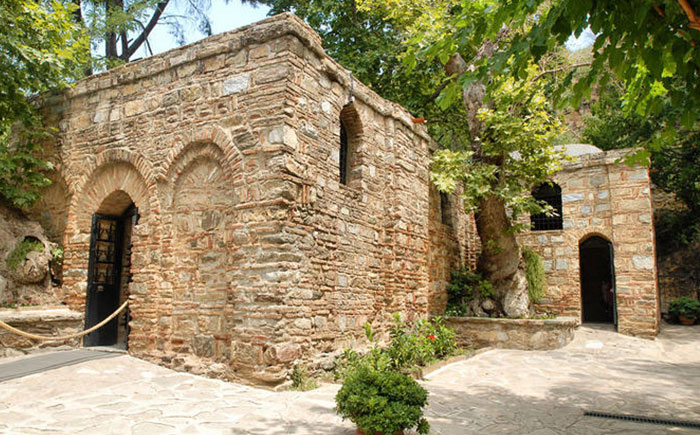 House of Virgin Mary is located on the top of the "Bulbul" mountain 9 km ahead of Ephesus, the shrine of Virgin Mary enjoys a marvelous atmosphere hidden in the green. It is the place where Mary may have spent her last days. Indeed, she may have come in the area together with Saint John, who spent several years in the area to spread Christianity. Mary preferred this remote place rather than living in crowded place.

The house of Virgin Mary is a typical Roman architectural example, entirely made of stones. In the 4th century AD, a church, combining her house and grave, has been built. The original two-stored house, which consisted of an anteroom (where today candles are proposed), bedroom and praying room (Christian church area) and a room with fireplace (chapel for Muslims). A front kitchen fell into ruins and has been restored in 1940's. Today, only the central part and a room on the right of the altar are open to visitors. From there one can understand that this building looks more like a church than a house. Another interesting place is the "Water of Mary", a source to be found at the exit of the church area and where a rather salt water, with curative properties, can be drunk by all.

Paul VI was the first pope to visit this place in the 1960's. Later, in the 1980's, during his visit, Pope John-Paul II declared the Shrine of Virgin Mary has a pilgrimage place for Christians. It is also visited by Muslims who recognize Mary as the mother of one of their prophets. Every year, on August 15th a ceremony is organized to commemorate Mary's Assumption.

Fill your tour with more historical memories while visiting the ancient city of Ephesus and the House of Virgin Mary.