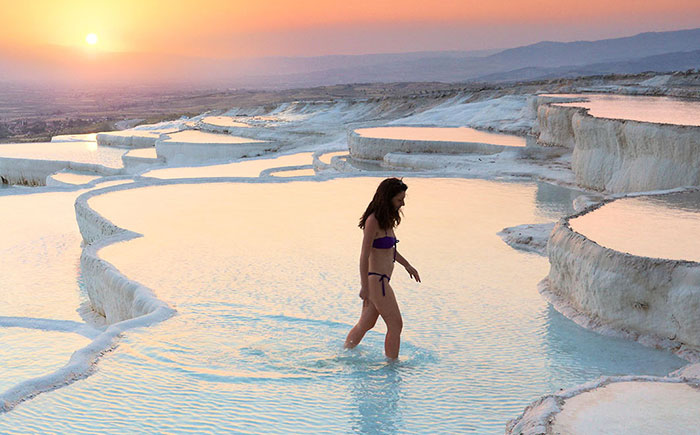 Located 14 km to the north of the provincial center of Denizli, Pamukkale lies on a hill dominating the Plain of Menderes at an elevation of 160 m. The name of the city in the Etruscan/Pelasgian language is "Swaura," meaning "Sacred City". Indeed, the city was subsequently Hellenized by the Macedonians and Byzantines and called Hierapolis again to mean "sacred city."

Pamukkale (Cotton Castle), is considered today the eighth wonder of the world. It is presumed that the travertines were formed in the course of a process which lasted 15 thousand years. As the water, having a temperature of 34 degrees Calcius, gushing from the underground springs at an elevation of 160 m off the plain of Menderes, with calciumbicarbonate content, flows down the hillsides, carbonmonoxide gas emanates, and the calciumbicarbonate, dissolving thereby, is sedimented, thus forming the white-coloured travertines. Therefore, the area is called Pamukkale (Cotton Castle).

As, in Karahayit located at a distance of 5 km to the north, the underground water having a temperature of 68 degrees Celcius, with iron, magnesium and sulphur contents, flows down the slopes, it issues carbonmonoxide gas in the like manner, thus forming red coloured travertines with the sedimentation of the iron compounds. This place is called Kirmizisu (Red Water).

If you dream of a wonderful holiday where you can enjoy the natural beauties and visit the ancient buildings and historical buildings, you should take the Pamukkale tour.